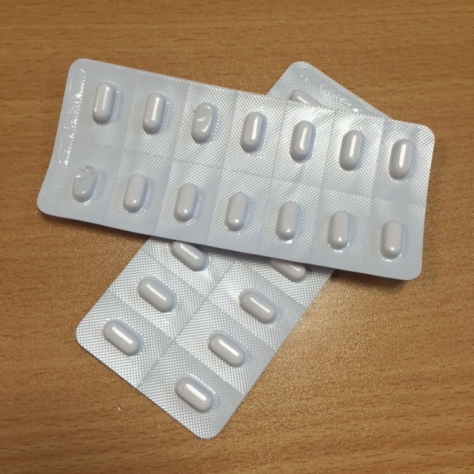 Like many people living with depression and anxiety, I take anti-depressants to help manage it and have been doing so for the last 3 or 4 years. It’s a very contentious issue for me. I hate the feeling that I may be reliant on a little white pill and often find myself wondering whether it’s the medication that makes me feel a certain way about something or whether it’s actually me and it scares me a little. But then there’s also the worry that things would be a lot worse without the tablets so it can at times, feel like a double edged sword.

I had lived with low mood and anxiety for many years before I plucked up the courage to speak to my GP about it; I guess I was frightened to admit that something wasn’t right, especially as mental health wasn’t as prevalent as it is now. The connotations of depression for me at the time were incredibly negative and I associated it with middle-aged women and refused to believe that a young woman in her early twenties could be living with it. My thoughts on antidepressants were much the same; I associated them with weak people and rather ashamedly an excuse for people who wanted time off work. I had also heard stories of people becoming addicted to them and becoming shadows of their former selves so it definitely wasn’t an idea I had ever entertained.

But then, I went through a really bad patch and was spending whole weekends locked in my room crying and I rarely saw anyone out of work, even my housemates. I realised I needed help. I went to see my GP and explained the situation and they offered me 3 options; medication,  counselling or both. At this point I felt so hopeless that I wanted everything they could possibly offer me to make me feel normal again so I opted for both.

Looking back, I don’t think I was really given enough information about antidepressants to be able to make a properly informed decision, but the fact the doctor seemed so blasé about it made me think it wasn’t a big deal. I was vulnerable, so off I went to Boots with my prescription for an SSRI (Selective Serotonin Reuptake Inhibitor) that I later found out was the infamous Prozac (it’s generic name is Fluoxetine). I was filled with the naïve hope that I’d be cured in a few months time much like when you buy one of those supposed wonder creams for cellulite a few months before your holiday.

The following 2 weeks were vile. My body, understandably, didn’t react well and I constantly felt nauseous with extreme headaches. I didn’t eat and lost quite a bit of weight, but that wasn’t the worst of it. Out of the blue, I started self-harming – something I’d never dreamt of doing before. And this carried on for a while. My arms and legs were a mess and after one particularly serious bout I decided to tell someone. It was my Dad and my older brother that I first told. I knew if I told my mum she’d be devastated and I didn’t want to worry her any more than I already had. I figured if I told my Dad and Paul that they’d be able to mask their worry on the phone and I needed that; I needed someone to tell me it was going to be okay, it was a blip and I could sort it.

I returned to the doctor and explained what had happened; again they were very nonchalant and when I suggested it might be the tablets they pretty much laughed in my face and said unless I wanted to take the tablets (I was already on the counselling waiting list) there was nothing more they could do. Scared and panicked by the thought of not having something to help me, I agreed to continue with the tablets and see where I was in a few months time once they had had time to work (I say work, but I’m not sure there was ever a point where I felt they were working as such).

Looking back, I regret this decision. I wish I had been stronger and said “look, I’m not comfortable taking medication, I want to look at other options”. But I didn’t and as I’m not a doctor I don’t know whether that was the right decision or not and whether the subsequent years of taking medication have helped me or just prolonged the issue. What I do know is, that I now feel strong enough to ask the questions, and have done.

Before Christmas I went to see my new doctor here in London and spoke about my medication and eventually coming off it. For the first time; a doctor actually asked me what I wanted, where I wanted to be. She understood that it’s my body and my mind and that the sluggish, numb, withdrawn feelings I’ve been having since my medication was increased a year ago aren’t necessarily doing me any favours. And she allowed me to make the decision of  reducing my medication and more importantly she supported that decision. I felt liberated.

Making that first visit to your GP when you’re experiencing low mood or anxiety is daunting and my advice to anyone in that position would be to prepare beforehand. We all know that doctors are over-stretched and that our allocated 10 minutes isn’t necessarily long enough when we’re trying to explain complex matters of the brain that we ourselves can’t even comprehend. I’d suggest writing some notes perhaps explaining the ways you’ve been feeling, including both physical symptoms and psychological and then any triggers you might be aware of. So for instance if crowded places ignite feelings of breathlessness, write it down. Sometimes when faced with a doctor it’s difficult to articulate things and we forget to mention important details; having it written down will help prompt you and if you’re feeling especially nervous you can hand the notes over for them to have a look at. In my experience that initial appointment is so very important as it can determine whether you feel comfortable asking for help in the future.

I’d also suggest doing some research on depression and anxiety and the treatments available as having an idea of how you’d like to proceed does help and you can establish whether you’re comfortable with the idea of medication or whether you’d prefer to start with talking therapies etc. The Mind website offers a wealth of easily accessible information that you can trust and it’s a great place to start.