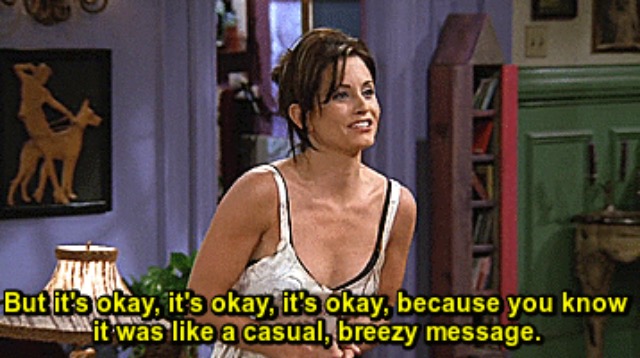 Today’s been a day for panic and anxiety – nothing new there I hear you cry! But rather than the physical panic attacks or the anxiety about an event it’s been a sheer blind panic about how people perceive me and how I come across online and in my communications; Facebook exchanges/Instagram/texts/Whatsapp/Twitter etc. I’ve painstakingly gone through my interactions over the last few days and cringed. Whether it be  incessant posting and hashtagging, or comments I’ve made that I deem witty but others, well, don’t; it’s all made me feel a bit pathetic and desperate.

I’ve said this before; social media is great but when you mix it with a dose of anxiety, paranoia and general ‘feeling like shit about yourself’ it can get a bit difficult. No matter how many people say they don’t, we all compare ourselves to others online. We all try and portray the great and good in our lives; the arty and the fashionable, but when we see other people’s pictures/posts etc. we forget that they are in fact a skewed take on someone’s life and not, pardon the pun, the whole picture.

And then there’s the issue of writing something that, in your head, is really witty and cool that actually isn’t and the other person doesn’t get it so you have to over-explain with something equally un-witty and a plethora of emojis. Sometimes this is played out for everyone to see or worse still it’s in one of those wretched conversations where you see a “read” sign but no reply and you find yourself fretting about whether said person now thinks you’re weird/stupid/unhinged.

I also find I do that thing where I post because I’m feeling a bit down or a bit lonely – the thought of a few likes or better still a comment; seeming like the answer to everything. Some sort of validation.  But again usually it results in no interaction which results in more feelings of hopelessness and self deprecation and so on and so forth.

I long to be one of those people that are really breezy online, someone that doesn’t analyse every single word in a text or a message (and generally make ridiculous assumptions) and not feel the need to document every moment in my life with a picture (and copious filtering, amiright?). I long to just be able to go; “hey, I’m feeling a bit rubbish, fancy a chat?” rather than posting a Guardian article about someone else feeling that way and suggesting it’s “a good read” with the hope that someone might pick up on my subliminal messaging.