It’s beginning to look a lot like that time of year that I really dread….

Avid readers (hey Mum, hey Dad) will know that I have spoken about this before – yet every year November comes and I get railroaded once again by my sudden plummeting mood and feelings of sadness despite knowing that it’s now a ritual of sorts. I love Autumn in an aesthetic sense, it’s my favourite season. The colours, the crispness and the copious amounts of red wine it brings. In one sense I like the shorter days and the darker nights too because it allows me to feel a bit hidden from the world – there’s something about the glaring sunshine that makes me feel very vulnerable so there’s a real comfort in big coats, hats and scarves and shying away.

Whereas a few months ago I had to take time off for feeling ALL the emotions and doing all the crying – I’ve reverted to the void, the numbness and the inability to shed any tears.  November has that effect on me, and always has, but more so since I now only think of it in terms of being the month my gran died. I’ve written about the huge gaping hole her passing left in my life, my guilt and my general inability to process those feelings and memories and I’ve spoken at length to counsellors about it, but it never alleviates, it never not feels fucking horrendous and unmanageable.

Grief is such a strange and personal thing. And whenever I think about it, I always remember my doctor as a teenager, telling me that we set ourselves up for grief whenever we love someone. And to some extent that has always been at the back of my mind – that overriding sense of doom – fuck I love this person and they’re going to die and I’m not going to be able to cope. It haunts me a lot, a feeling I can never fully shake and one which has been reaffirmed in times where I have come very close to losing people and sort of cauterised my heart in some way – perhaps making me harder or less open to the idea of wholehearted love and loving with everything you have.

There’s something we talk about a lot at work (I work for a dementia charity); anticipatory grief. Which as the name suggests, is grieving for someone before they have died. In the context of dementia it’s around the idea of someone not feeling physically or mentally present, but it’s a term which has sort of come to represent something for me personally and how I try and describe my feelings when I think about the unique relationship I had with my gran and how her death has altered me. I think I was always scared of her dying and sort of always went through the scenario in my head (my diaries have proven this) and therefore was never really able to fully enjoy the unique bond we had because I was petrified of losing it (something which went on to happen in my romantic relationships too).

I talk about it in my previous blog about her, how I struggled as a child, had zero confidence and was a bit of a loner, never really feeling like I fitted in. I spent a lot of time with my gran and loved every second of it. Her stories, her style, her great capacity to love and her immeasurable kindness were everything to me. And I suppose despite knowing that I would one day have to say goodbye, I thought it would be different, that I would be better prepared, that I’d be able to say everything I wanted. But I didn’t and it still stings. It makes me now feel scared to ever say goodbye to anyone, whether it be after a trip home or just a trip to the pub – I forever think, is this the last time I’m going to see this person, have I told them how much they mean to me, do they know I really care about them? It’s a bit suffocating because it makes being “breezy” pretty damn hard and probably makes those on the receiving end wonder if I am completely insane.

The notion that things get better with time is true, but also a complete load of bollocks too. Especially when it comes to missing people. Because life goes on and as we grow up and go through things, we miss those people even more because we want them to be around to share things but they’re not. And when life is a bit shit, we want them around even more. So not only do shit things happen but they happen and the people we want to be around to help us through aren’t and it makes it more shit. And then you’ll hear their favourite song, smell their perfume or hear a phrase they used to say and you’re utterly floored because for a split second it feels like they are here again.

The thing that has been really getting to me lately is the dreaming. I go through bouts of really intense dreaming and they often include my gran in some way or other quite traumatic events, so you wake up feeling distraught and exhausted and have to be at work in an hour dealing with everyone else’s issues (I work in HR). And of course I know it’s just a dream but I find them really hard to forget and they seem to affect me for a while afterwards because they always seem so real and centered around some of my biggest fears and regrets.

Anyway, the real reason I wrote this was because I saw the below on Instagram and it is just one of the most heartbreakingly beautiful things I have ever read from Nick Cave and so astutely talks about grief and how ultimately we have no choice in it. 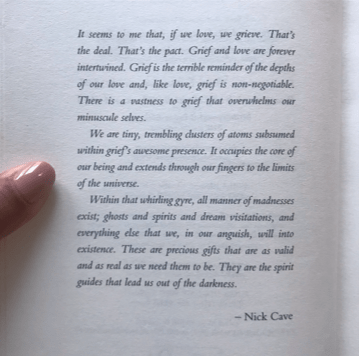